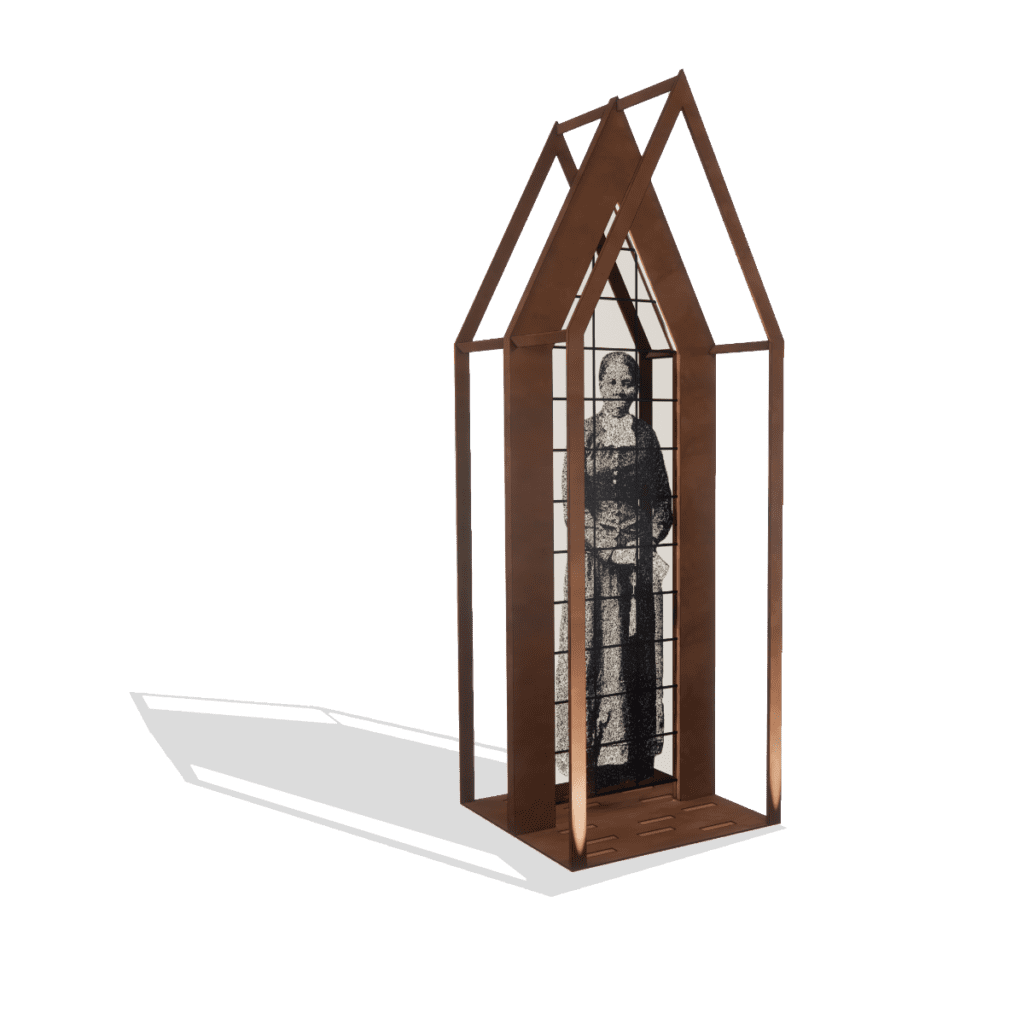 When the Gateway development at Millbrae Station opens in the summer of 2022, it will include both a street and new public monument celebrating the legendary abolitionist and Underground Railroad conductor Harriet Tubman to mark the 200th anniversary of her birth.

The monument, titled “Freedom’s Threshold,” will be designed by San Francisco artist Cheryl Derricotte, who was selected for the project by a group that includes developer Republic Urban Properties, the NAACP San Mateo, BART, Caltrans and members of the Millbrae and Redwood City city councils. Derricotte was one of the 763 artists selected last year to exhibit in the de Young Open and was among the first artists selected for the Villa SF residency program.

The 12-foot aluminum and glass sculpture is expected to feature a large-scale image of Tubman surrounded by a peaked-roof structure. The foundation will consist of 14 glass bricks representing the 14 trips Tubman took on the Underground Railroad, with representatives from the community invited to print meaningful words on each brick.

Derricotte has been wanting to create a public monument for some time in the Bay Area and was in the running for the Maya Angelou project that Lava Thomas eventually secured in San Francisco as well as the 19th Street BART Station in Oakland, so she said being commissioned for it “was the most delightful surprise.”

“With my proposal, I wanted them to see that I was a person who had worked with glass for a long time and also had a background of doing images of formerly enslaved people, beginning with my first solo show at MOAD back in 2016,” she said, adding that “Freedom’s Threshold” is believed to be the first monument to Tubman constructed with glass.

The Chronicle talked to Derricotte about her research into Tubman and why she thinks Black female artists’ careers frequently have slower trajectories than other artists.

Q: Were there concerns about working in glass in a public space?

A: There were two ways I went about that: One way is to say, “Yes, glass can break.” However, we also know glass can last forever. I mean, there was glass in the Pompeii show (from 79 A.D.).

One of the other things I did was design my sculpture with sections of glass to address that concern so that if a section got damaged, you could take that square out and replace it, as opposed to an 18-foot sheet of glass with Harriet Tubman’s image.

Q: Do you feel like this is a project that will change your career?

A: Public art was a goal I set for myself coming out of my MFA. … It’s a growth moment for me as an artist and a professional. I’m 56, and I think a lot of Black women’s careers can be slow to take off. Look at sculptor Simone Leigh being named to the Venice Biennale for the U.S. Pavilion in her 50s.

When I look across the board at women artists that I deeply admire, they have careers that are a little longer and slower perhaps. When you look at what’s gone on with the careers of Black women, you see that even fewer make it to those upper echelons of shows. I remember going to the Carrie May Weems solo at the Guggenheim and hearing that she was the first Black woman ever to have a solo show there — that was in 2014.

Q: Is there any public art or artist that was influential to you?

A: I’m very fortunate originally coming out of Washington, D.C. There was such a rich tradition of glass artists that worked in public art, both from the studio where I learned, the Washington Glass School, as well as artist Therman Statom. We always considered him the father of all things Washington glass.

I lived on the Northeast side of Capitol Hill as an adult before I moved to the Bay Area in 2011. There was a park not far from where I lived called Lincoln Park with a statue erected of the great educator Mary McLeod Bethune. A lot of people called it Bethune Park after her.

I also visited the Vietnam Memorial and I saw it when it was just Maya Lin’s memorial, and I remember the fight about adding the bronzes of the servicemen and making sure that at least one of those servicemen was Black.

Q: What did Harriet Tubman mean to you going into this project?

A: I knew about her as the legendary conductor of the Underground Railroad, but I also knew her as a famous Pisces, because I’m a Pisces, even though people weren’t really clear her exact birth date because of slavery.

Growing up in D.C., Harriet Tubman was originally from Maryland, so a lot of her story also centered around the Eastern Shore of Maryland.

This proposal has made me dive much deeper into her story. I learned how much property Harriet Tubman owned at the time of her death. We hear that she died poor; she was cash poor but land rich.

I loved seeing the architecture of her home, which is still standing in Auburn, N.Y. — that really was a guiding principle for me. My original sketches were based on her home. I feel like what I’m trying to show is a sliver of the house and we’re either going to see Harriet in the house or through the window.

A: I have a one-month residency in New Orleans at Paper Machine where I’ll be working on a suite of prints and maybe some handmade artist books.

I was also named a Windgate Foundation fellow at the Vermont Studio Center, and I’m planning to do Open Studio again in San Francisco in Islais Creek (Oct. 1-3). I have a space there across from the electrical room; when you come with a big glass kiln, you want to be as close to the electrical room as possible.