Grand views and exquisite design at one of D.C’s most expensive residences 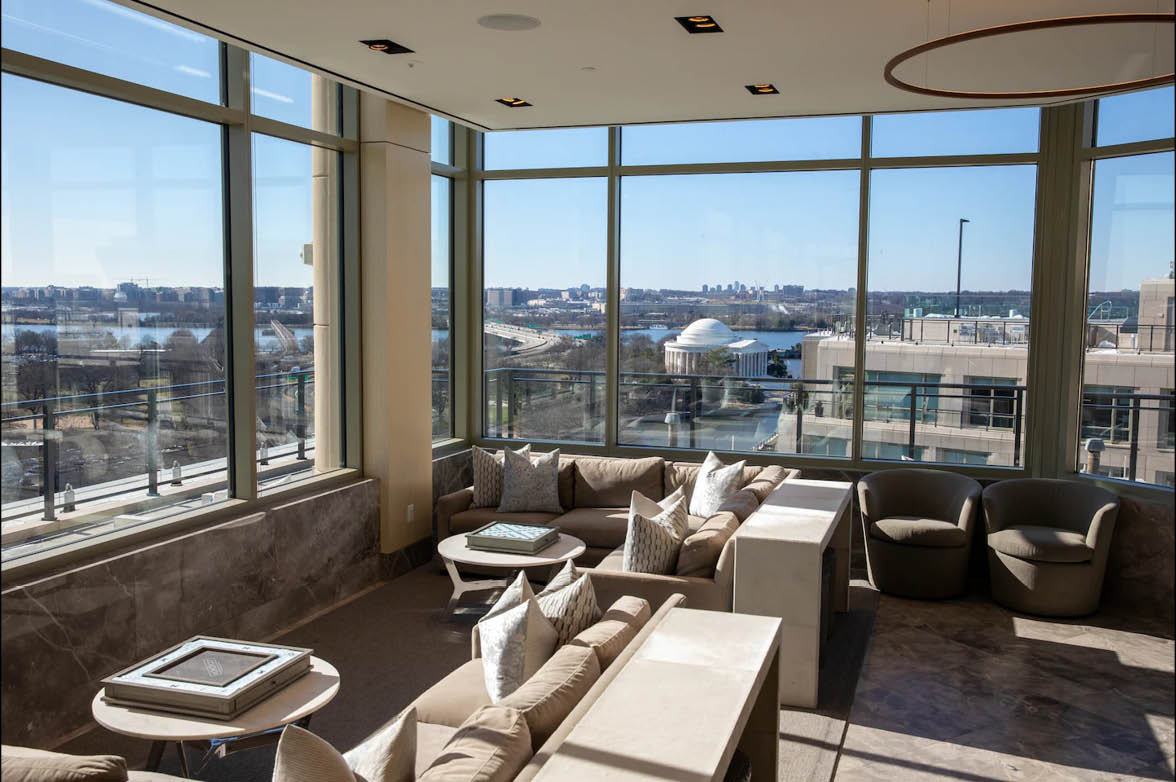 Brett and Lisa McGinnis have lived in Pittsburgh; Sterling, Va.; Germantown, Md.; and most recently, Chicago. Brett is 49 and working as a partner at Ernst & Young, which required him to move to Washington about a year and a half ago. The move gave the family a chance to live a dream.

“We were interested in living in the city because we never had,” says Lisa, who is 58 and a retired registered nurse. “It was always a dream that someday we’d be able to come down into the city, so it was pretty special when my husband got this opportunity.”

Another part of that dream included trading the home they owned for a luxury home they’d rent in a new high-rise. Now they are in an exclusive community of residents in 1331 Maryland Ave. SW, one of the most expensive rentals in Washington. They love living there for now. But, as Brett’s assignment is temporary, it’s likely they’ll eventually relocate again.

Combining a temporary living arrangement with desirable amenities softened the transition from homeownership to renting. “The amenities of the lobby coffee bar, tenant dog wash, outside dog run and full gym with free classes are exceptional,” says Lisa. “1331 has a professional, kind staff from the lobby people all the way through the maintenance crews. All of these are reasons we live here.”

A real estate agent steered them to the 14-floor, 373-unitapartment building at the end of an under-the-radar cul-de-sac, across the street from the front entrance to the Mandarin Oriental Hotel. The McGinnis family did a walk-through and were sold.

“We had a price range and were hoping for something new and in the city so we could walk around,” says Lisa. “When we look out and see these monuments, it’s pretty special. Coming through the entryway I felt like we were on a very nice vacation. There’s a lot of beautiful places but not with these views.”

The scenes to the west provide a bird’s eye view to the Jefferson Memorial and the Tidal Basin. The National Mall is four blocks north and the Southwest Fish Market is across the street. The building has been leasing for a year and made headlines early by revealing penthouses with rents topping$20,000 a month. Lower floors with fewer in-suite amenities start in the$2,000s.

The McGinnis family includes three adult sons who are spread across the country. Before making the jump to Southwest Washington they decluttered, emptied the nest and sold off their 7,000-square-foot home north of Chicago. They are now tucked into a 1,200-square-foot unit on the 12th floor that includes two bedrooms and three baths. Private elevators are available for the floors above the ninth, the finishes are a bit more upscale and the cooktops are gas as opposed to electric. Residents also have access to reduced rates and amenities at the Mandarin.

In addition to the views and luxury, the building offers another feature — security — that appeals to high-profile tenants and guests, which have included foreign dignitaries, politicians, musicians and sports figures.

Jeff Moulton and Joe Homan work together, respectively, as chief executive and chief operating officer at Stephenson Technologies Corp., based in Baton Rouge, La. The company is a nonprofit defense contractor with the federal government as its largest client. The two men also share a two-bedroom, two-bath unit in 1331.

“I have a [another] colleague who lives in the building,” says Moulton. “The price point here is a little bit higher than the other places in town but it’s within reason. But really the thing that got me was the security aspect.” A fob is required to navigate the building’s public and private spaces while also tracking the movements of its tenants.

Parking spots under the building go for $325 a month. There’s an infinity edge swimming pool on the roof, conference room, two clubrooms, fire pits, piano lounge and a catering kitchen. A 24-hour concierge is in place to help arrange private chefs, event planning and pet care. There’s a fitness center outfitted with a fleet of Pelotons and a curated on-site library.

Some units have smart ovens that can be controlled with a phone app, oversize cast-iron soaking tubs and wine refrigerators. All the units have stainless-steel appliances, Italian cabinetry, quartz countertops with waterfall edges, full-height backsplashes and nine- to 10-foot-high ceilings.

Part of the 1331 experience includes a visit to model units that are furnished and decorated by local D.C. designers. Stanley Lewis is a designer for Mitchell Gold + Bob Williams, working out of the showroom on14th Street NW. His firm has provided interior design services for at least 12tenants in the building with Lewis doing most of them. Lewis says he believes the building reflects its surroundings while bucking some trends.

“D.C. is a typically a very developer-driven environment, not design-driven,” says Lewis. “The spaces here are very well designed, it’s a pleasure to be in a space that works on its own.”

Lewis eased the McGinnis family into their new digs and assisted the defense contractors with theirs, right down to the smallest details. “I literally made the beds,” he says. “I sourced the bed linens, so it was turnkey for them. Sometimes there’s a little bit of psychology involved.”

The building was designed via a collaboration between WDG Architecture, based in D.C., and Robert A.M. Stern Architects, based in New York. 1331 was brought into existence by Republic Properties Corp., based in D.C. The firm is deeply rooted in an area of Southwest Washington where a tangle of rail lines and highways rope around superblocks of government buildings, which makes land development more challenging than usual.

Republic, which also had a hand in developing the Mandarin Oriental across the street, refers to its creations in the neighborhood as “The Portals.”

“It was always a great site, a prominent location in the city,” says Steven Grigg, president of Republic. “The name the Portals comes as a reference to the city. It frames the view to the Capitol from the Jefferson Memorial. It was a special location that deserved a special building.”

Despite the high rents, the building is nearing full occupancy. It attracts interest from other real estate people anxious to uncover its secrets. “I have to turn down developers who come down and want to tour the building to get an idea about what we’re doing and discover our secret sauce,” says David Raley, who manages the property for Bozzuto. “We’re at the end of a cul-de-sac and asking for the highest rents in D.C. — they want to see it for themselves. This is a unique project.”

The building is in an area of the city that was flattened by heavy-handed urban renewal and then twisted by questionable urban planning, tax disputes, architectural missteps and a merry-go-round of developers. There’s a Starbucks and a Potbelly down the street from 1331 and a Whole Foods is about two miles away. It’s half a mile from the L’Enfant Plaza Metrorail station and the VRE and yet it feels isolated.

Recently, the Spy Museum moved to L’Enfant Plaza and steps were added that connect Benjamin Banneker Park to the Wharf. Elizabeth Miller, director of the physical planning division for the National Capital Planning Commission (NCPC), has worked on two major planning initiatives for the area and is encouraged by the recent efforts to liven things up. “Tremendously successful, not only the steps but also a path that goes from the overlook down to the Wharf,” she says. “It’s really been essential in activating the area.”

NCPC has designated the area bordering 1331 as part of the Southwest Ecodistrict and refers to the axis defined by L’Enfant Promenade as 10th Street SW, the remains of which are below the bridged length of pavement. The agency and Republic Properties envision extending Maryland Avenue to the east by decking over the 12th Street Expressway to create more usable land and reconnect the street grid.

The U.S. Postal Service and Energy Department’s headquarters buildings are seen as vital centers of employment but also impediments to further development. “It’s an important location for federal headquarters, we see that being retained,” says Miller. “But we believe the area can be developed in a way or filled in a way that brings a better mix of use that would support everyone for the better.”

Republic is not waiting for the federal buildings to go away as it moves forward with building another apartment community next door to1331. The plans are for a 350-unit, less ornate community that will start construction in June and be completed in two years. Grigg says he believes that adding a Circulator bus line would help connect the neighborhood with the National Mall and the Waterfront Metrorail station (Green and Yellow lines).

Raley, who refers to his tenants as “explorers,” sees the loose connections at 1331 as a feature, not a bug. “You feel like you’re insulated, but it’s so close to everything,” he says. “If you’re living in Adams Morgan and decide to go get something to eat, you’re still walking five to eight minutes, which is the same thing as here, but it’s not as activated.”

Lewis sees the building and the neighborhood as a pleasant pit stop on the racetrack of life. “Every client I’ve had here has been different — for some it’s their home. For others it’s a period of their life that hadn’t existed before and won’t exist again.”

Lisa McGinnis is a year and a half into what should be a four-year gig for her husband, and their plans are uncertain. She loves the Smithsonian museums but hates the summer humidity.

In the meantime, she’s trying to get the most out of her tour of duty in Washington by accessing the building’s treasures and getting to know the neighbors. “There is as much or as little tenant interaction as one desires,” she says. “The rooftop terrace has become a beautifully decorated and catered area for holiday events. We also use the outdoor fireplaces, grills, kitchens and pool area as a second living area. As of now we don’t plan on staying in the D.C. area, yet we’ve enjoyed it immensely.”