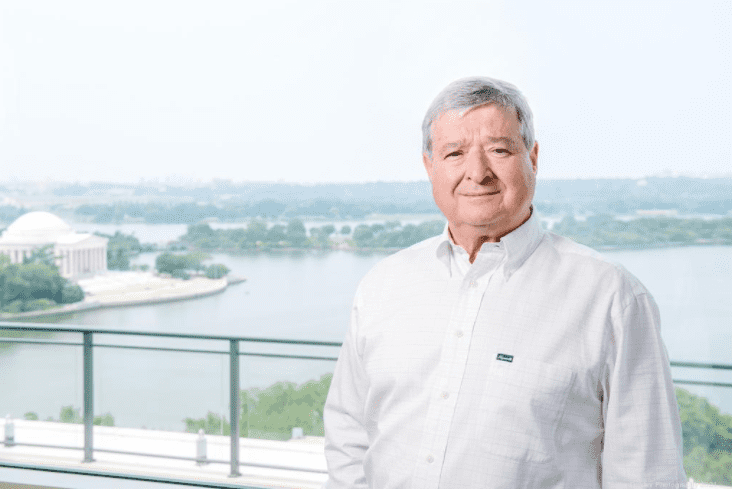 If you walk through downtown D.C., odds are it’ll only take moments to find a development that developer Steven Grigg had a role in designing and building.

It’s been nearly 40 years since Grigg, a licensed architect, joined Western Development Corp., rising to senior vice president of that firm before spinning off with Western co-owner Richard Kramer to co-found Republic Properties Corp., where he now serves as president and CEO. Over that span, he’s had a hand in major developments like Market Square, Washington Harbour, Republic Square and the Portals, just to name a few. The company, headquartered in the Portals complex in Southwest D.C., has grown to more than 50 employees and $7 billion in assets under management.

Ultimately, Grigg has had a hand in the kinds of places where people live, work, shop and play. But his experience has provided him a special view of D.C.’s evolution — over the years, the city’s population has shifted in favor of mixed-use while its neighborhoods have grown more dense.

And he says it’s primed for yet more change.

How has D.C. evolved in your time? It felt like a relatively quiet market years ago, but now, Washington has evolved to one of the major office and commercial markets in the country. And that’s changed everything. The environment of downtown is more active now. And even the suburbs — you see people changing where they want to live, favoring transit and the good amenities to live by.

What’s been the best addition to the local development landscape in your mind? It’s the mixed-use development. We have figured out so many creative ways to combine uses in buildings around this city. We have a lot of public spaces spread out and being able to mix what’s in the neighborhoods helps make the most of it. We know how to make a statement here — how to create a landmark with a place.

And what remains the biggest challenge? We need balanced development. It’s got to complement the economic growth here, and it’s got to be smart. Change happens in a city like this one, and I think about how we adapt to things. We need to make sure we’re building the kind of housing that matches the jobs, because people care about where they live now, maybe more than ever. And also, we need to be smart about our office design. There are consequences when things are out of balance.

What does the future hold? Covid-19 is going to change the way we live and work, and we need to be ready for that. The way we design offices is going to change — it’s going to have to complement work-from-home. But people want to live in the city, and I don’t think that dense living is going away.

What’s the project you’re most proud of? I’d say the Portals [in Southwest D.C.]. It’s evolved over time when it started as an office project but transformed into something more mixed-use. We have high occupancy in our office buildings led by Pension Benefit Guaranty Corp. But some parts we’d envisioned for office became residential, because the market has shifted. There’s a light at the end of the tunnel there, too. The final phase, with a 13-story residential building at 1311 Maryland Ave., is our last big piece.

Any buildings you wish you could redesign? No, I don’t think I’d go there.

What do you do in your free time to unwind? I love to sail. Just get out and be on the water. When I get the chance, I take mine and head up to New England.

What’s your best advice for new employees? Immerse yourself in the business while focusing on the mission at hand.